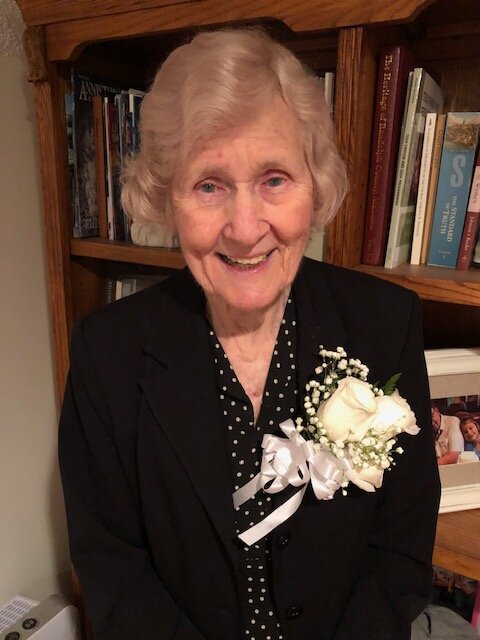 Please share a memory of Betty to include in a keepsake book for family and friends.
View Tribute Book
Betty Smith Powell McCoy died in Glencoe, Alabama on Monday, November 21, 2022 at age of 90 due to heart disease. She had just celebrated her 90th birthday on Saturday with family and friends coming by to see her. The 11th of 12 Smith children, Betty Lou was born on November 19,1932 to parents James Arthur and Katie Lee (Traylor) Smith in the small community of Tenbroeck on Sand Mountain in Dekalb County, Alabama Graduating from Gadsden High School in 1949, Betty attended Auburn University where she met and married Richard Eugene Powell (1928-1990) on September 21, 1951. They had two daughters, Lori Kate and Ellen Marie. Betty spent her adult years pursuing her two greatest passions; obtaining higher education and traveling the world. She eventually obtained a bachelors degree at the University of South Alabama ; a masters degree in Career Guidance, and her doctorate degree in Christian Counseling. Her career was spent working in the state of Alabama as a teacher, a school counselor and an administrator. Post retirement she met and married Carl Milton McCoy (1918-2001) a retired army colonel. Together they enjoyed traveling to many places in the US. After his passing, she traveled more extensively visiting numerous foreign countries including .......Spain, France, England, Portugal, Germany, Austria, Australia, New Zealand and China. Her last loving companion was Jimmy Smothers, a sportswriter at the Gadsden Times. Together they worked, traveled, authored books, attended local functions, and enjoyed having fun. She is preceded in death by her parents, her husbands, daughter, Ellen P Murray, her step-son Bob McCoy, her sisters Noma Lee Wilbanks, Doris May Mitchell, Dixie Joyce Dennis, Jimmie Faye Williams, Billie Rose Rains, Sarah Frances Croft, and brothers Lester Smith, Hoyt Oscar Smith, Calvin Joe Smith, and Bobby Smith. She is survived by her daughter, Lori Powell Rogers, sons-in-law David L Rogers and Edward L Murray; and stepsons. Also surviving are her grandchildren and great grandchildren, numerous nieces and nephews. Funeral plans are to be determined with a memorial service at a later date.
To send flowers to the family or plant a tree in memory of Betty McCoy, please visit Tribute Store
Services for Betty McCoy
There are no events scheduled. You can still show your support by sending flowers directly to the family, or planting a memorial tree in memory of Betty McCoy.
Visit the Tribute Store
Print
Online Memory & Photo Sharing Event
Online Event
About this Event

Look inside to read what others have shared
Family and friends are coming together online to create a special keepsake. Every memory left on the online obituary will be automatically included in this book.
View Tribute Book
Share A Memory
Send Flowers